Indigenous Workers and Unions: The Case of Winnipeg’s CUPE500 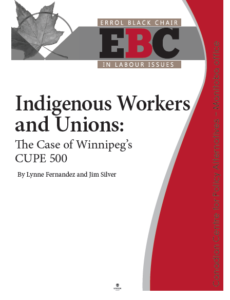 In this paper we examine the case of CUPE 500 and its relationship with Indigenous City of
Winnipeg workers as a case study. Given the changing labour market in which precarious work is becoming more common and union density is shrinking, and considering the negative experiences many Indigenous workers
have had with unions, we have undertaken this study to get a snapshot of the current relationship between one group of unionized Indigenous workers and their union, CUPE 500. What do CUPE 500’s Indigenous members think of their union?  Are they engaged with the union? If so, in what ways and why are they engaged? If not,
why are they not involved and what might be done to secure their involvement? And what has CUPE 500 done to date to engage with their Indigenous members?